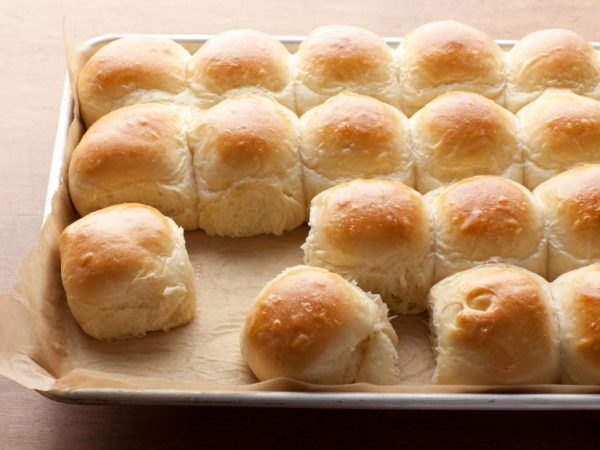 We are going to make some parker house rolls. The parker house rolls is an old school, pillowy, yeast flavored, buttery rolls that can come in countless shapes and flavors. It’s just the perfect dinner roll. When making a yeast dough that you want to bake up into a soft style of a roll there a few key ingredients. The first being milk as opposed to water which is you would find in a traditional crusty bread recipe. Pour one cup of milk in a mixer, add a touch of water, just a quarter cup add a quarter teaspoon of yeast two tablespoon f sugar, two tablespoons of melted butter, a single egg adds a nice it of richness and three and a quarter cups of all-purpose flour.

The final ingredient to add is a teaspoon of salt beat the dough in the stand mixture until it is soft and tender enough so you can easily knead it by hand. Once the dough has been formed, remove it from the stand mixer and roll it on your baking surface then put a little layer of oil in a big bowl and place the dough, cover it and let it rise. It takes a good 90 minutes for the dough to rise and double in size. Once the dough has risen, put a light dusting of flour on the baking surface and using a rolling pin, roll out the dough on the surface in a square shape. Once done, cut through the dough into an equal square-shaped dough then cut half on them to create rectangle shaped dough. Before you start folding the parker house rolls, base them with a little butter and this is a classic to the parker house roll which was invented at the Parker House hotel in Boston.

We are going to bake these in a muffin tin, take each dough, give it a single twist and then press it into the baking tin. After you are done, set them aside for 30 minutes just to rise up. Once done, place them in a preheated oven at 350 degrees and these parker houses rolls only bake for 15 minutes to 20m minutes to turn a beautiful golden brown. These parker house rolls are a thing of beauty that you can always feel proud about making.